As I have mentioned to you many times, I like to test different approaches, technologies and solutions. I may not have told you yet that I once wanted to be a Java developer. I became a .NET developer only because I couldn’t get any job as Java Developer. After long looking for a job, I was finally hired as a C# developer, and it stayed like that for a long time. I don’t regret it, as .NET moved forward, C# language evolved a lot, and Java stagnated at some point. I’m talking about the language because the community, especially the OSS, has always been strong and vibrant. I have always envied the maturity of Java tools, especially those for “enterprise” and production-ready solutions. From time to time, I participated in Java projects (probably the longest in Android), now I also contributed to the Java EventStoreDB client. I recently checked how my Java skills held up and did an Event Sourcing example.

I decided to port my C# sample. My main assumptions were:

The presented use case is Shopping Cart flow and is modelled as Web API written in Spring Boot and Java 17.

After I finished the initial version (https://github.com/oskardudycz/EventSourcing.JVM/pull/1), I decided to ask the “community” for a review. I wanted to make sure that what I did, was not just a dumb port but the code that’s idiomatic and similar to what typically is done in the Java World. That’s especially important, as I was doing so far mostly infrastructure code in Java, and business-related may differ from it. I wanted to get sharp but honest feedback.

Well, I got what I asked for! 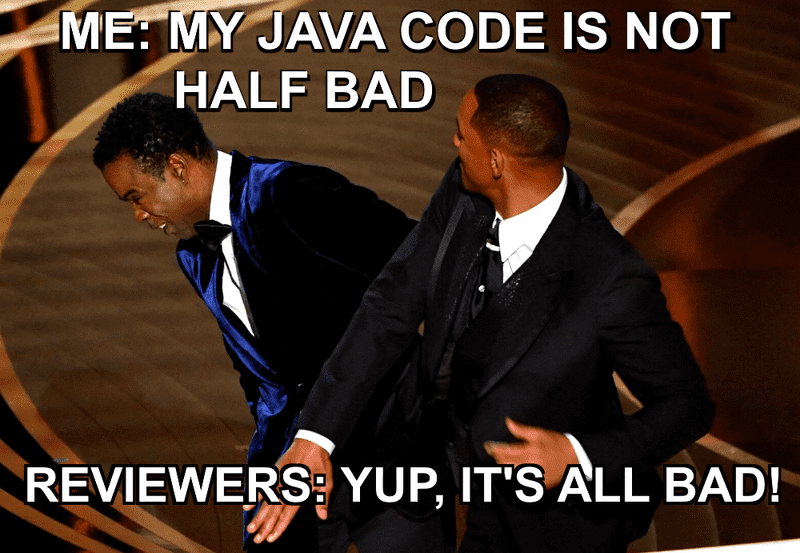 Okay, it wasn’t that bad, but it cost me “a bit” of work. And that’s awesome, as my code and my skill improved by that!

See full sample in ShoppingCart.java. I miss such a possibility in C# because I believe that it enables concise and precise modelling of data structures.

I even got thrilled about how cool is that! I think that I’ll port that to my C# samples.

It’s been a long way! But it was worth it, and thanks to the community’s help, I eventually came up with a much sounder solution. Plus, I was able to share with you what I have learned. I hope that it may save you some mistakes. You don’t have to learn on your own constantly!