Big picture descriptions and overall explanations are great. They help us to understand the foundations of new ideas and then find the place we need to evaluate more. Still, we’re starting to face reality when we try to go deeper. This may be harsh. It may be a good bullshit filter when we realise the idea is not as simple as pictured. We may just throw, “this can’t be done!” or try to find our way through the problems.

Let’s take an example of the Outbox pattern I described in my two articles:

Two articles should be enough to exhaust the topic, aye? Let’s go deeper and discuss the potential poll-based implementation on top of Postgres. As it’s the most flexible relational database nowadays, it cannot be that hard.

Let’s say that we’ll use the table structure from the previous article:

We’ll be storing messages to publish there and then continuously polling those messages in the background process using the following query:

The last processed position will be taken from the subscriptions table:

After we process all the messages from the read batch, we update the last processed position for the particular subscriber. So far, so good, easy peasy.

We’re using the BIGSERIAL type to generate a monotonic, autoincremented position. The happy path for the three parallel transactions will look as follows: 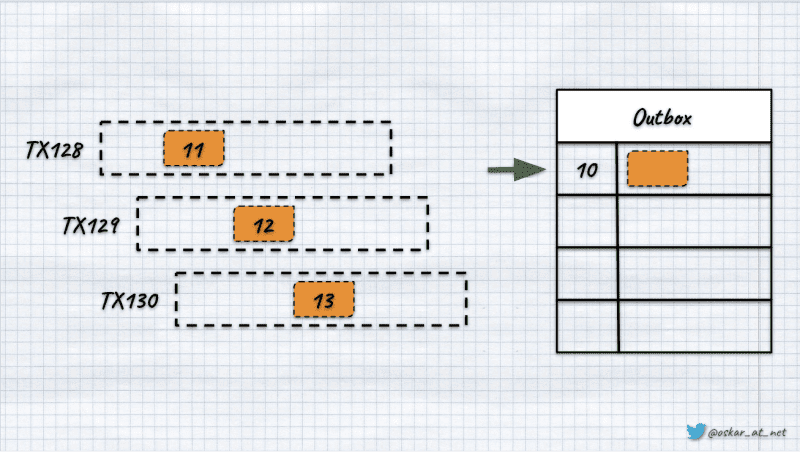 Once transactions are committed, the results should look like this: 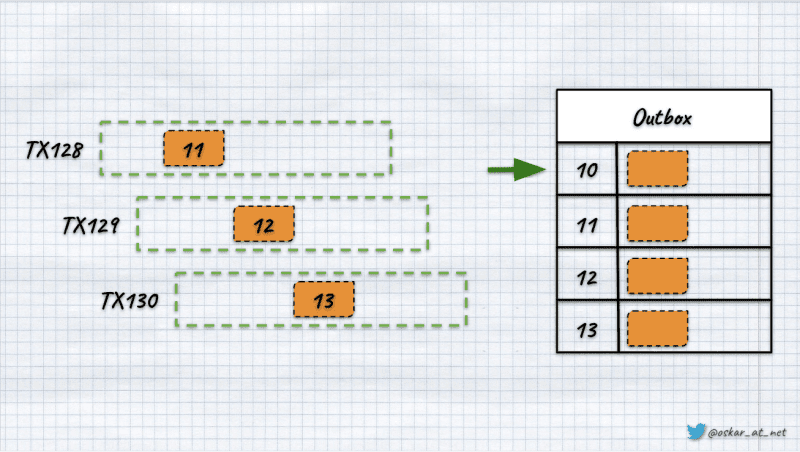 Yet, since I’m writing this article, you can guess that something may be odd here. What if the last transaction was the fastest and committed as the first one. 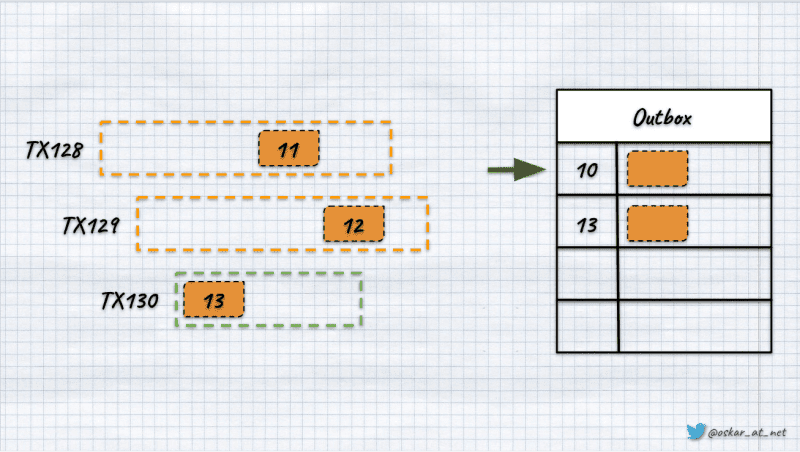 If the rest followed the order, we’d see that the order in which records were appended to the table may differ from the order of positions. 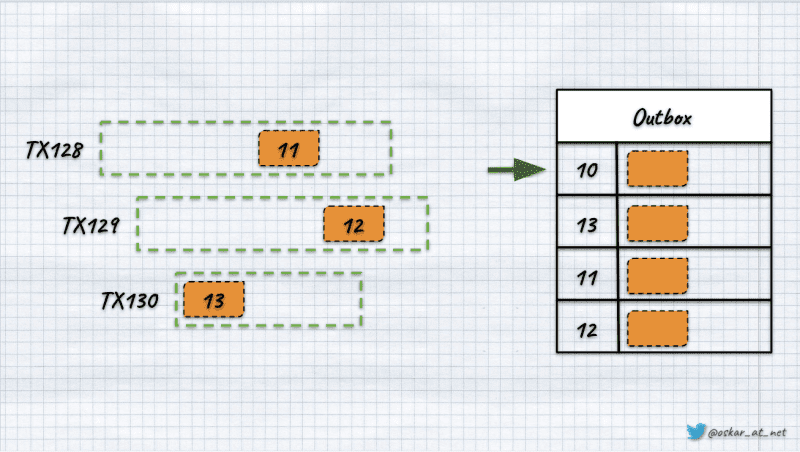 This is possible because of how Postgres sequences work. They’re evaluated before the transaction commit. _“But we’re using BIGSERIAL here!“. It doesn’t matter. BIGSERIAL is just a syntactic sugar for the autogenerated Postgres sequence. It’s just using it behind the scenes.

The other important thing is that number of sequences is not reused. This is a valid approach to avoid having an accidental clash of numbers between transactions. The number is lost if the transaction fails and is rolled back. In our case, this may result in gaps in position numbering. 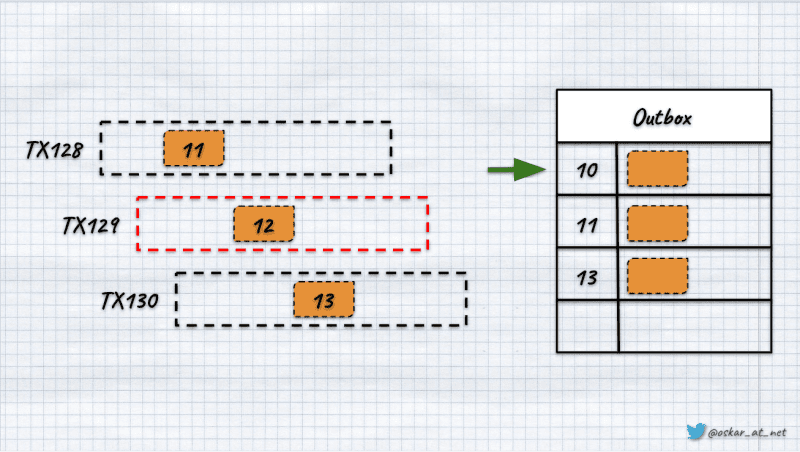 So right now, we have two issues:

I already wrote that positions are pretty important for Event Stores. Yet, even using an outbox to broadcast messages may have severe consequences.

Let’s get back to the race condition example. 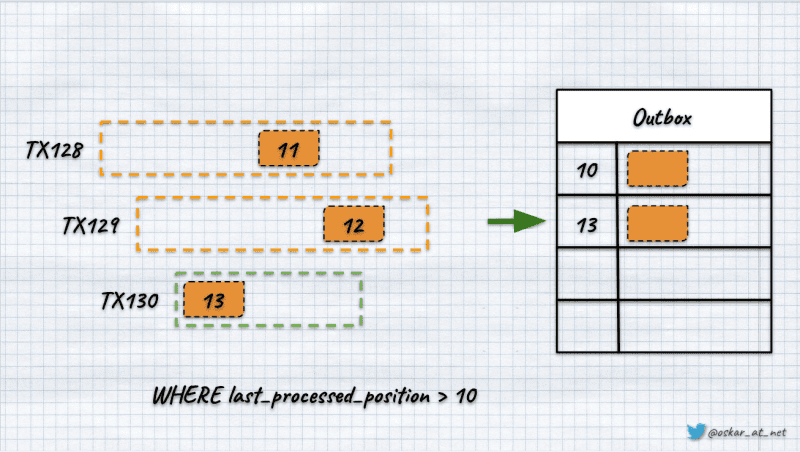 If the 3rd transaction was the fastest, we try to query by the last processed position before the 1st and 2nd were committed, then we won’t know if the gap was caused by some transaction rollbacks or race condition. If we optimistically assume that the gaps were caused by rollbacks, we may lose messages. 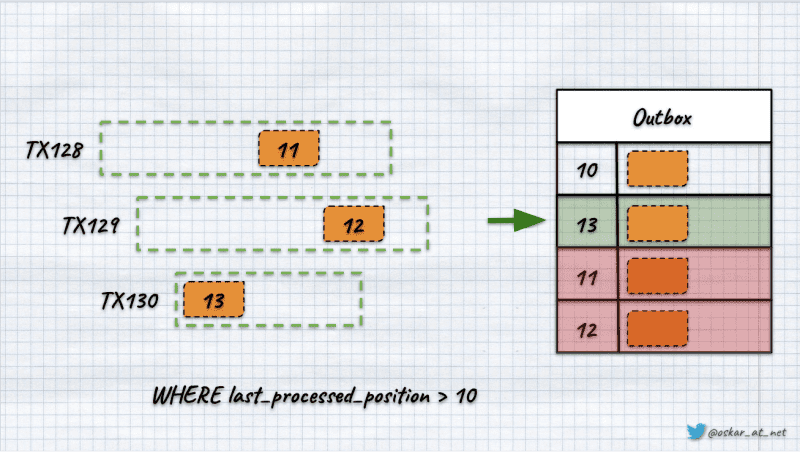 We’ll update the position with the newly read maximum one (13), and then the following query will use it, skipping records added after that (11 and 12).

We could workaround the ordering issues, but losing messages is a no-go for most systems.

What could we do?

A first thing is a nuke option. It’s nicely presented by Laurenz Albe in his article. We could manually generate gapless numbers in the “singleton table”. W could do it like that:

It would update the number in the table only if the transaction succeeded. Why is it a nuke option? Because it’s locking the whole seq table making all the processing that’s calling this function sequential. This could be fine for low throughput but high importance numbers, but not for the mechanism like outbox that’ll be the backbone of the communication. Trust me, I tried that, and the performance hit was the backbone of the communication was too big to accept.

The next option is to do gap detection like Marten is doing. If we delay the message publishing by waiting a bit, we could try to assume that the gaps have come from rolled-back transactions. If we found such, we could append “tombstone event”, marking the gap as checked and locked. Once we fill all the holes with such events, we can continue processing. In Marten, it’s called High Water Mark. It’s the furthest known event sequence that the daemon “knows” that all events with that sequence or lower can be safely processed in order by projections. The high watermark will frequently be a little behind the highest known event sequence number if outstanding gaps in the event sequence are detected.

Yet, writing such a gap detection mechanism is non-trivial. Jeremy explained some of the challenges in his talk at Event Sourcing Live.

What if we could just live with those gaps? I said we should not, so am I doing some Jedi mind tricks? And that’s how we come up with the last idea. There’s a trick…

Postgres has a mechanism of returning us information about current active transactions. We can get such information by calling pg_current_snapshot function. Once we have it, we can call on the result of another function, pg_snapshot_xmin, which selects the minimum transaction id.

So if call pg_snapshot_xmin(pg_current_snapshot()), we’ll effectively get the minimum active transaction id. In Postgres, transactions are monotonic, gapless numbers that are unique throughout the cluster lifetime. We could use that for our needs. We could add a transaction id column to our outbox table and fill it with the transaction id to which we’re appending the message.

We’re using xid8 type, a 64bit, sequential number type used to represent transaction ids. Having that, we could change our query to use it:

Thanks to that, we won’t get the “Usain Bolts”, so the messages from the transactions were faster than transactions that started earlier. 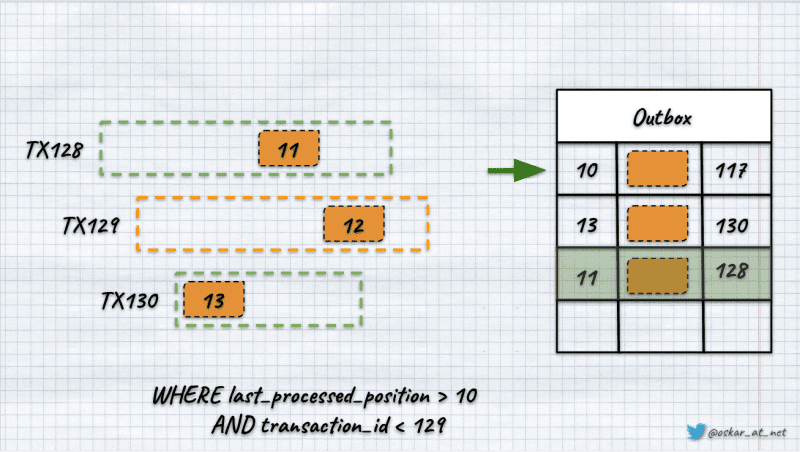 It looks good enough, but let’s discuss one more scenario. Let’s say that we have the same set of transactions again. Yet, this time 128, so the earliest one finished first. Still, it got the global position later than the still active 129. 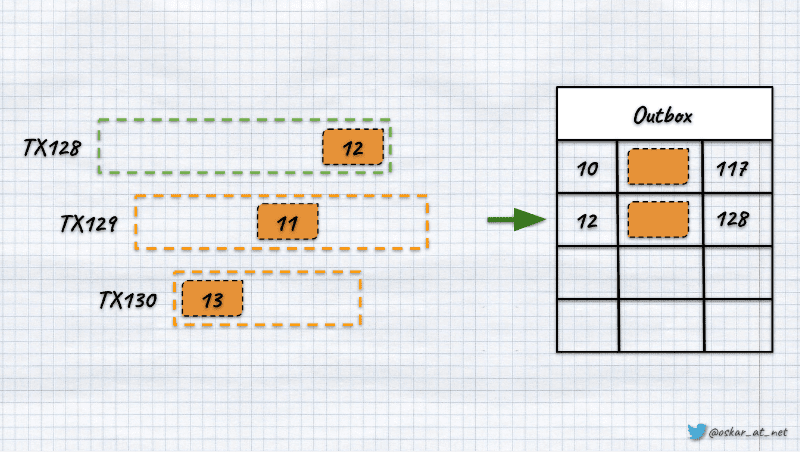 If we query now using the sequence number to filter out already processed records, we’ll lose the message from transaction 129. It has a smaller number (11) than the one processed in transaction 128 (12).

To solve that, the only option we have is to filter by the transaction id instead of the global position. We’re benefiting from the fact that a transaction id is a monotonic number. 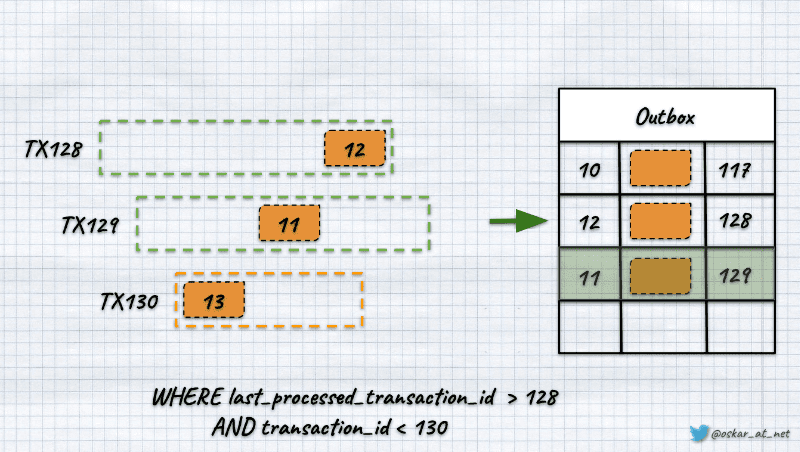 This filter will give us a guarantee of not losing any messages. It is a much better option than the previous nuke option, as we don’t have a performance hit while adding new messages (besides using more data). Our queries may be a bit delayed if our transactions last long, so we should ensure they’re processed quickly. Worth noting is that our ordering guarantee respects when the transaction was started, not when the message was appended. That should be fine for most cases, but in some edge cases, it may create problems if forgotten.

The last thing to mention is that one transaction can append more than one message. In that case, we would only like to be polling the same message once (e.g. in case of retry). The final SQL query to respect this would be:

To sum up, as always, the devil lies in details. Good and useful patterns are not always easy to implement. We should always ensure that we defined our expected guarantees upfront and that they’re matched. But hey, isn’t that what we’re getting paid for?

p.s. Big thanks to Tomek Masternak for reviewing the article and pointing out the last use case I didn’t initially predict.

p.s.2. Ukraine is still under brutal Russian invasion. A lot of Ukrainian people are hurt, without shelter and need help. You can help in various ways, for instance, directly helping refugees, spreading awareness, putting pressure on your local government or companies. You can also support Ukraine by donating e.g. to Red Cross, Ukraine humanitarian organisation. You may also consider joining Tech for Ukraine initiative.