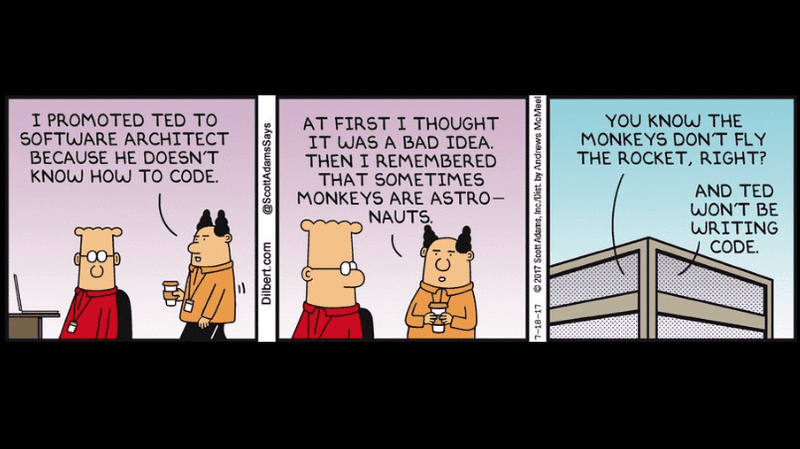 “Architects are not needed anymore. Those days are gone!”

“We have autonomous teams that drive their design.”

“We have DevOps team.”

Have you heard or made such statements? During the years we create an enormous set of the architect subtypes - Software Architect, Enterprise Architect, Solution Architect, Chief Architect, DevOps Architect, Junior Architect. I’m sure that there are already bullshit architect title generators somewhere on the web. This term was so bloated that I had a hard time calling myself an architect.

For many of us, architects are just a bunch of middle-aged white dudes sitting in the Ivory Tower. Like a Mage Guild - throwing ideas out of context. Dettached from the real development struggles.

Some of us, following the microservice and DevOps movements, resigned from having architects. Now our teams are autonomous, making their own decisions.

Some companies and people already found out that having distinct pieces is not always the best approach. Uber evolved from “rewrite everything” mode to “Domain-Oriented Microservice Architecture”. Matthew Skelton and Manuel Pais provided the concept of Team Topologies to reduce the cognitive load and impact of Conway Law.

Having all of that, I still believe that having a software architect makes sense, even in the remote, DevOps, microservice development culture. We might not call them architects. We might just name them technical team leaders. In my vision, it should be rather a group of people than single indivudual to not create bottlenecks.

Some time ago, I wrote a vision of such a team for the project I was working. I want to share it with you. It’s my Architect Manifesto. It’s a bit idealistic, maybe naive at some points, but in my opinion, it’s a decent description of the direction we should aim.