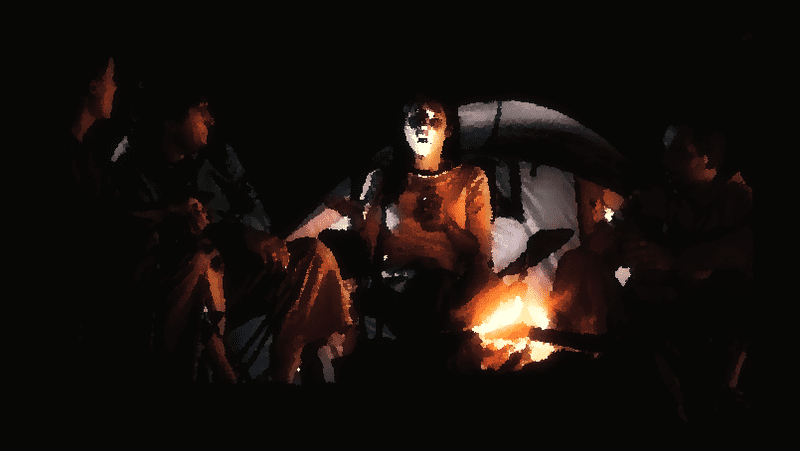 Events (schema) versioning is a boogeyman for people learning Event Sourcing. They’re a spooky tale told at the campfire. There’s a truth in it, as migrations are always challenging. As time flow, the events’ definition may change. Our business is changing, and we need to add more information. Sometimes we have to fix a bug or modify the definition for a better developer experience.

Migrations are never easy, even in relational databases. You always have to think on:

We should always try to perform the change in a non-breaking manner. I explained that in Let’s take care of ourselves! Thoughts on compatibility article.

Still, the complexity and frequency of schema changes are usually overestimated. If you constantly need to change, that’s usually a sign of some modelling or communication issue with the business. Typically, business processes do not evolve rapidly. However, our understanding may often change if we’re learning while coding. It’s always worth ensuring that we’re doing enough thinking and design upfront.

Also, as I wrote in How to (not) do the events versioning?, it’s better to avoid such scenarios. How? By keeping our streams short-living:

“If our aggregate lives shortly, a day or two, week, then these are easier to manage. If we’’‘re deploying new changes with the new events schema, then events with the old one will be living for at most a few days. Thanks to that, we can break our deployment into two phases. First, we deploy a version that supports both schemas and mark the old one as “obsolete”. Then, during the next deployment, we get rid of the code responsible for old events, because there are no living aggregate instances with old schemas.”

Still, it’s always worth knowing those practices to use them depending on your use case. Greg Young wrote a book about it: Versioning in an Event Sourced System. I recommend you to read it, especially that’s for free, which is always a reasonable price.

If you prefer watching than reading you can also check the video below:

There are some simple mappings that we could handle on the code structure or serialisation level. I’ll be showing samples using C# and System.Text.Json serialiser, but patterns and samples should be generic enough to apply to other environments and serialisers.

Having event defined as such:

If we’d like to add a new not required property, e.g. IntializedAt, we can add it just as a new nullable property. The essential fact to decide if that’s the right strategy is if we’re good with not having it defined. It can be handled as:

Then, most serialisers will put the null value by default and not fail unless we use strict mode. The new events will contain whole information, for the old ones we’ll have to live with that.

We must define a default value if we’d like to add a new required property and make it non-breaking. It’s the same as you’d add a new column to the relational table.

For instance, we decide that we’d like to add a validation step when the shopping cart is open (e.g. for fraud or spam detection), and our shopping cart can be opened with a pending state. We could solve that by adding the new property with the status information and setting it to Initialised, assuming that all old events were appended using the older logic.

Renaming property is also a breaking change. Still, we can do it in a non-breaking manner. We could keep the same name in the JSON but map it during (de) serialisation.

Let’s assume that we concluded that keeping ShoppingCart prefix in the ShoppingCartId is redundant and decided to change it to CartId, as we see in the event name, what cart we have in mind.

We could do it as:

The benefit is that both old and the new structure will be backward and forward compatible. The downside of this solution is that we’re still keeping the old JSON structure, so all consumers need to be aware of that and do mapping if they want to use the new structure. Some serialisers like Newtonsoft Json.NET allows to do such magic:

We’ll either use the new property name or, if it’s not available, then an old one. The downside is that we had to pollute our code with additional fields and nullable markers. As always, pick your poison.

Sometimes we want to make more significant changes or be more flexible in the event mapping. We’d like to use a new structure in our code, not polluted by the custom mappings.

We can use an upcasting pattern for that. We can plug a middleware between the deserialisation and application logic. Having that, we can either grab raw JSON or deserialised object of the old structure and transform it to the new schema.

For instance, we decide to send also other information about the client, instead of just their id. We’d like to have a nested object instead of the flattened list of fields. We could model new event structure as:

We can define upcaster as a function that’ll later plug in the deserialisation process.

We can define the transformation of the object of the old structure as:

Or we can map it from JSON

We can also solve the same cases as simple mappings, but we have more handling options.

Let’s say that we forget to add information about who initialised the shopping cart (user id). We cannot retroactively guess what the user was, but if we were lucky enough to track such information in user metadata (e.g. for tracing), we could try to map it.

Upcaster from old object to the new one can look like:

From JSON to the object:

In the same way, as described above, we can downcast the events from the new structure to the old one (if we have the old reader/listener or, for some reason, want to keep the old format).

From the new object to the old one:

From new JSON format to the old object:

At this point, you may be wondering, “That’s nice, but how to connect that with real code?“. Let’s dive into that.

We’ll be plugging between the serialisation and application logic as explained initially. We’ll define the class that will contain and process all defined transformations.

We have two Register methods. Both of them has JSON and handler function as params. One is used to register the JsonDocument raw transformation, the other to register an object to object one. Sample registrations:

We also have TryTransform that either transforms JSON into the new object structure or returns null. We’ll use it further on.

and use it as

It’s the most straightforward wrapper that requires manual mapping for all the event types, but it benefits from being explicit and less error-prone. For the convention-based mapper, there is a risk that refactoring accidentally changes the event type name stored in the event store. Still, a viable option is a mixed solution. Read also more in Mapping event type by convention or see example of such approch in my repository.

Having those classes, we can define the final deserialisation logic.

The logic is simple. It’ll either transform JSON through registered transformations (e.g. upcasters or downcasters) or run the regular deserialisation logic.

You might want not only to transform a single event into another (1:1) but also a set of events into another one (N:M).

Let’s take as an example scenario where we can initialise not only empty shopping cart but also filled with products. For some time, we were doing that by publishing multiple events: ShoppingCartIntialised and ProductItemAddedToShoppingCart for each added product item. We decided that we’d like to replace this with event containing list of product items:

We want to process our logic using a new event schema. However, that’d require zipping multiple stream events into a single one. We were lucky enough that we decided to store in metadata correlation id. It’s an identifier of the command that initiated business logic. All of the events resulting from the command processing will share the same correlation id.

Using it, we could decide if ProductItemAddedToShoppingCart was a part of the initialisation request or not.

We need to take the stream events and transform them into another sequence of events. It could be modeled by such class:

We allow registering multiple transformations. Thanks to that, we can chain them using the Aggregate method, taking the previous transformation’s result as a base for the next one.

To connect it with the deserialisation process, we need to add it to the EventSerializer defined in the previous steps.

We can implement function doing event grouping as described above as:

You can say that, well, those patterns are not migrations. Events will stay as they were, and you’ll have to keep the old structure forever. That’s quite true. Still, this is fine, as typically, you should not change the past. Having precise information, even including bugs, is a valid scenario. It allows you to get insights and see the precise history. However, pragmatically you may sometimes want to have a “clean” event log with only a new schema.

It appears that composing the patterns described above can support such a case. For example, if you’re running EventStoreDB or Marten, you can read/subscribe to the event stream, store events in the new stream, or even a new EventStoreDB cluster or Postgres schema. Having that, you could even rewrite the whole log and switch databases once the new one caught up.

I hope that those samples will show you that you can support many versioning scenarios with basic composition techniques. 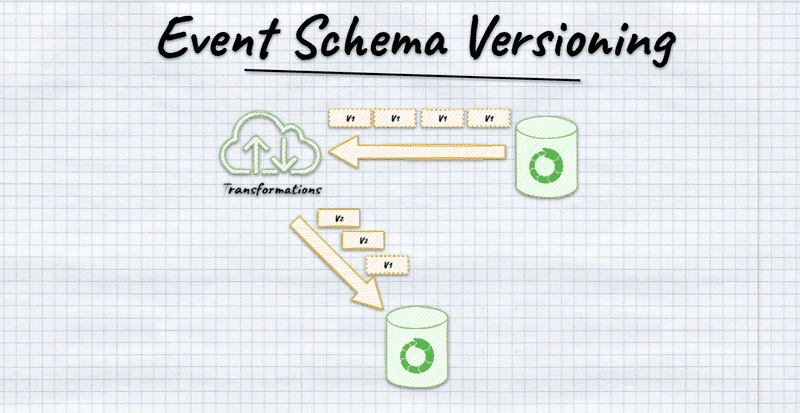 Nevertheless, the best approach is to not need to do versioning at all. If you’re facing such a need, before using the strategies described above, make sure that your business scenario cannot be solved by talking to the business. It may appear that’s some flaw in the business process modelling. We should not be trying to fix the issue, but the root cause.

You can check full sample in my: